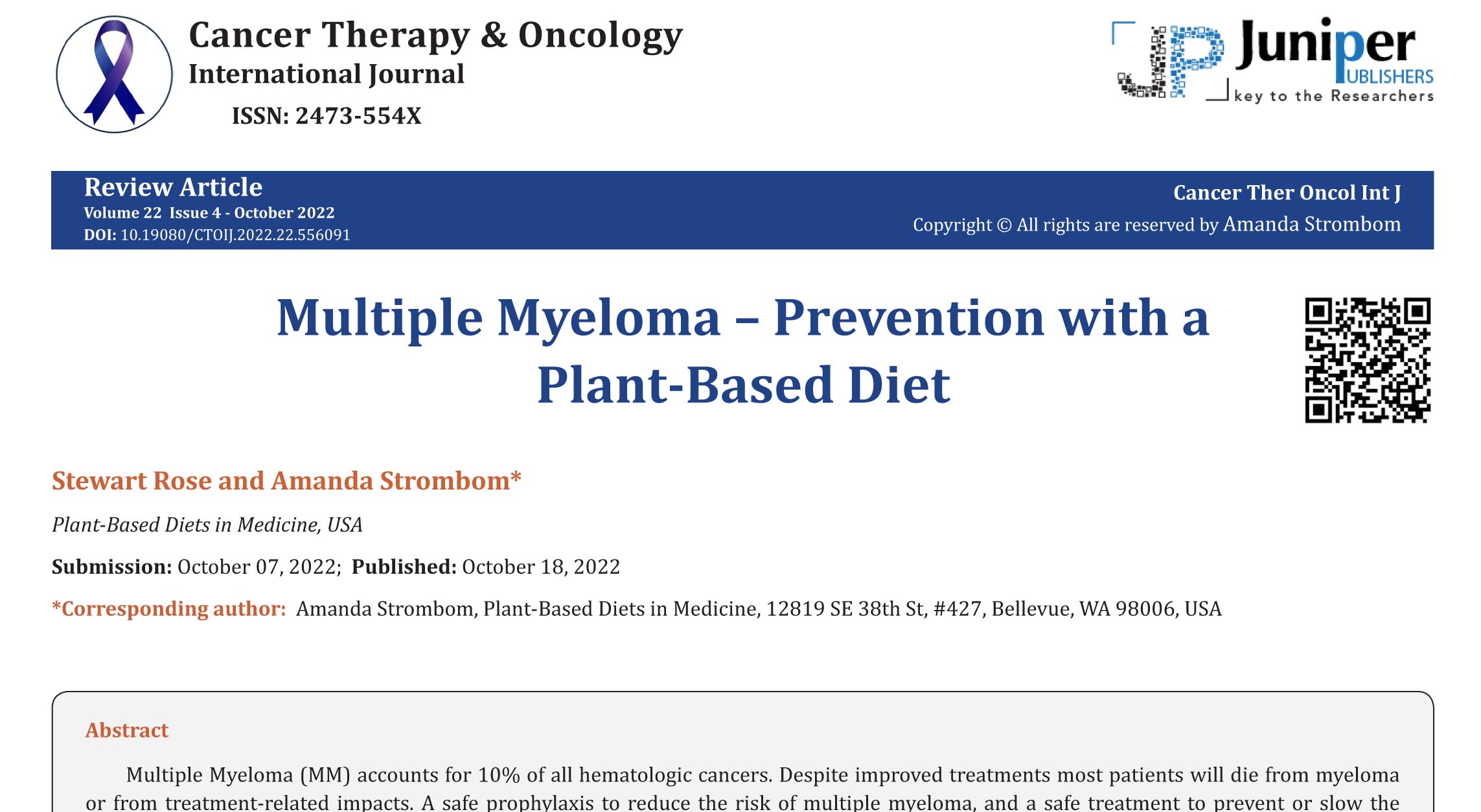 Multiple Myeloma (MM) accounts for 10% of all hematologic cancers. Despite improved treatments most patients will die from myeloma or from treatment-related impacts. A safe prophylaxis to reduce the risk of multiple myeloma, and a safe treatment to prevent or slow the progression of monoclonal gammopathy of undetermined significance (MGUS) to multiple myeloma, is urgently needed.

Vegetarian diets are associated with lower BMI in observational and randomized controlled studies. Vegetarians, on average, have lower levels of IGF-1. The lower CRP and IL-6 concentrations among vegetarians and vegans may be mediated, in part, by a lower BMI. A high BMI increases the risk of MGUS proceeding to MM. One study showed that vegetarians had only 25% of the risk of multiple myeloma as meat eaters.

Cardiovascular disease (CVD) was associated with a 55% increase in mortality in multiple myeloma patients. A plant-based diet is an efficacious prophylaxis and treatment for CVD.

A plant-based diet has the significant advantage of having no contraindications or adverse reactions. It deserves a place in the prevention and treatment of MM and MGUS. Patients are interested in how their diets can help treat MM and improve their quality of life. Patient compliance with plant-based diets has been good in several studies.

Multiple myeloma is mainly a disease of the elderly, with a median age above 65, and is the second most common hematological malignancy in high income countries.  It’s a heterogeneous disease, with survival ranging from 1 year to more than 10 years. Median survival in unselected patients with MM is 3 years. The 5-year relative survival rate is 46.6%. (4) Survival is higher in younger people and lower in the elderly. (5) (6)

The introduction of immunomodulatory drugs, proteasome inhibitors, and CD38-targeting antibodies has extended survival, but ultimately the majority of patients will die from their disease, and some from treatment-related complications. (7) Therefore, a safe prophylaxis to reduce the risk of multiple myeloma, and a safe treatment to prevent or slow the progression of MGUS to multiple myeloma, is urgently needed.

Multiple myeloma (MM) is a disease in which there is a clonal expansion of plasma cells initially in the bone marrow which results in the production of a monoclonal protein. (8) It is followed by a proliferation and infiltration of the bone with clonal plasma cells, and an increase of abnormal monoclonal immunoglobulins in the serum or urine, eventually resulting in end-organ damage. (9)

Multiple myeloma (MM) is preceded by monoclonal gammopathy of undetermined significance (MGUS) (10) (11), a premalignant asymptomatic condition characterized by elevated abnormal serum protein levels, observed because of increased monoclonal immunoglobins. (12) (13) Alternatively, it can be preceded by smoldering multiple myeloma, in which initiating genetic abnormalities, such as hyperdiploidy and translocations involving the immunoglobulin heavy chain, are already present. (7)

Epidemiologic studies have confirmed that diet is a known risk factor for plasma cell disorders. (21) In a study of pre-diagnosis diets, western style diets, especially proinflammatory diets, were shown to significantly increase the risk of mortality by 16% -24% per standard deviation, when compared to low-meat plant-rich diets, which decrease the risk of mortality. (22) One study showed that vegetarians had only 25% of the risk of multiple myeloma as meat eaters.  (23) Two large prospective cohort studies support the theory that Western diets, noted for their high inflammatory or insulinemic potential, may be linked to an increased risk of multiple myeloma (MM), while vegetarian and vegan diets are associated with a decreased risk. (24) (25)  In addition, a study of individual foods showed that cooked tomatoes and cruciferous vegetables reduce the risk of myeloma while ice cream and cream soups increase the risk. (15)

Obesity, which is associated with inflammation and dysregulated endogenous growth factors (26) (27), has consistently been positively associated with MM risk. (28) (29) (30)  The International Agency for Research on Cancer has recently concluded that there is now adequate evidence behind the association between BMI and MM. (31) One study has recently shown that high BMI, measured during midlife (≈50 years old), was associated with an increased risk of progressing from MGUS to MM and other LP (lymphoproliferative) diseases later in life, suggesting that exposures that originate during the midlife period and perhaps earlier in life, play a role in the pathogenesis of MM and related diseases diagnosed later in life. (32)

Another study found a significant positive linear trend in death rates with increasing BMI among MM patients. (33). A meta-analysis of ten prospective studies found that with each increase in BMI of 5 kg/m2 (over 25 kg/m2), there is an increased incidence of MM for both men and women (34). In particular, evidence supports the role of excess weight and especially obesity in the transformation of MGUS to MM. (35)

Obesity is characterized by a state of chronic, low-grade inflammation, due to the release of cytokines such as IL-6. (40) The lower CRP and IL-6 concentrations among vegetarians and vegans may be mediated by BMI. (41) In addition, the naturally occurring substances in plant foods, including phytochemicals, antioxidants, dietary fibers, and lipids, have anti-inflammatory bowel actions. The literature indicates that many of these compounds of plant foods exert their beneficial action by altering cytokine production. Specifically, phytochemicals such as polyphenols or flavonoids are the most abundant, naturally occurring anti-inflammatory substances. The effects of phytochemicals are associated with modulating the levels of interleukin IL-6. (42)

One study found that age and comorbidities are independently associated with increased risk of mortality in MM. The influence of comorbidities varies over time, with the greatest impact noted in the first year after diagnosis of MM. (46) This study found that cardiovascular disease was associated with a 55% increase in mortality in multiple myeloma patients. (46) A plant-based diet is an effective prophylaxis and treatment for CVD. (47)

Besides diet, other risk factors for MM include non-nutritional factors such as alcohol consumption, oncogenes, environmental causes such as insecticides, organic solvents, agent orange, and radiation exposure. (48) (49)

As patients with plasma cell disorders live longer due to therapeutic advances, outcomes may be further improved by optimizing nutrition. Additionally, monoclonal gammopathy of undetermined significance (MGUS) and low- to intermediate-risk smoldering multiple myeloma (SMM) present unique opportunities for early dietary intervention, given the standard of care is observation over time. (50)

MM patients commonly complain of weight gain and are interested in nutritional guidance to self-manage and improve their health. (51) Cho et al. examined the supportive care needs of 141 patients with MM and found that education on healthy foods was a priority for patients, following requests for information on future disease outcome and honest medical staff explanations. (52) Patients with MM are interested in how their diets can be modified to improve their disease course and long-term health outcomes. (51)

Patients with MM are four times as likely to have rheumatoid arthritis. (59) A plant-based diet is an efficacious treatment for rheumatoid arthritis. Studies have shown significant improvements in specific symptoms, such as number of tender joints, Ritchie’s articular index, number of swollen joints, pain score, duration of morning stiffness, grip strength, and improved laboratory values such as sed rate (ESR), C-reactive protein, and rheumatic factor. Patients placed on a plant-based diet also have a beneficial shift in intestinal microbiota, which correlates with clinical improvement. (53)

A plant-based diet has the significant advantage of having no contraindications or adverse reactions. When treating a patient with a plant-based diet it is important to titrate medications as the effects of diet become evident.

Studies have highlighted the nutritional deficiencies frequently seen in MM patients. Greenfield et al. (64) found that 37.5% of participants were vitamin D deficient (<30 nmol/L) while an additional 21.8% had inadequate levels (30–50 nmol/L). Twenty-five percent were also found to be folate deficient and 6% had reduced levels of vitamin B12. A retrospective chart review study (N = 78) found that 14.1% of MM patients had folate deficiency. (65)

There may be an association between B12 deficiency and multiple myeloma, and its onset can signify worsening of the disease. (66)  Vitamin B12 level might have prognostic significance since according to one study, hypercalcemia and fracture rate is increased in the vitamin B12 deficient MM patients. (67) All patients placed on a plant-based diet must receive vitamin B12 supplements. (68)

While much research has been done on preventing and treating several neoplastic pathologies, multiple myeloma hasn’t received as much attention.  Much more research is needed.  However, Urvi Shah of Memorial Sloan Kettering Cancer Center is currently leading a Phase II study to test whether a whole foods plant-based diet would lead to changes in myeloma biomarkers for MGUS patients.

Since persistent organic pollutants, including insecticides, bioconcentrate greatly in the fatty portions of meat and dairy, research to determine if there is a correlation with multiple myeloma would be helpful in understanding this pathology.

There also needs to be research to determine if butyrate-producing intestinal bacteria can prevent or treat MGUS and MM. A plant-based diet is known to increase the amount of butyrate producing bacteria. 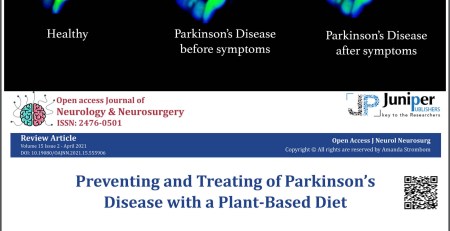 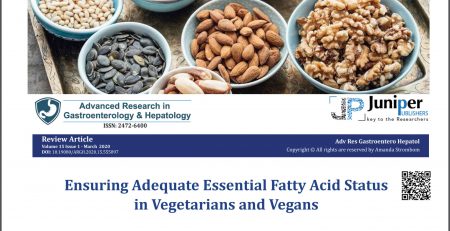 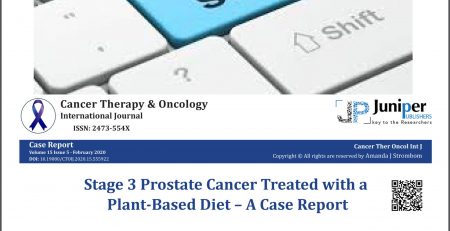 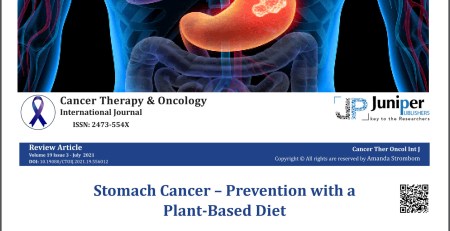