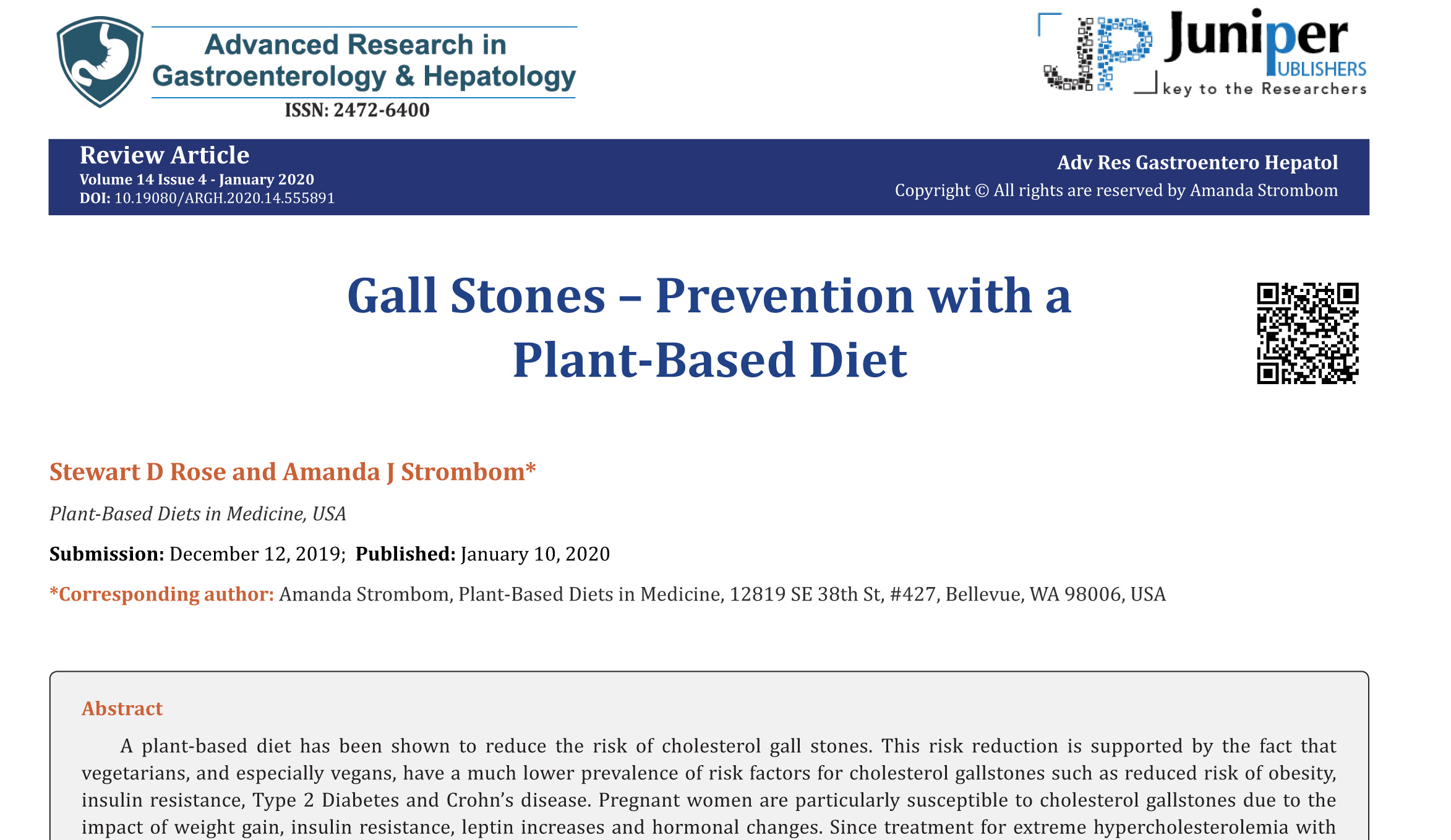 This article was published in Advanced Research in Gastroenterology & Hepatology.

A plant-based diet has been shown to reduce the risk of cholesterol gall stones. This risk reduction is supported by the fact that vegetarians, and especially vegans, have a much lower prevalence of risk factors for cholesterol gallstones such as reduced risk of obesity, insulin resistance, Type 2 Diabetes and Crohn’s disease.

Pregnant women are particularly susceptible to cholesterol gallstones due to the impact of weight gain, insulin resistance, leptin increases and hormonal changes.  Since treatment for extreme hypercholesterolemia with medication during pregnancy is risky, a plant-based diet is indicated.

Gallstone disease constitutes a major health burden that has increased more than 20% over the last 3 decades. (1) (2) (3) The prevalence of gall stones (cholelithiasis) is about 10 to 15 percent of the population of the U.S., or well over 25 million people. (1) (4) Nearly 1 million new cases of gallstone disease are diagnosed every year and approximately one quarter of these require treatment.

The burden of cholelithiasis and its complications, such as cholecystitis, pancreatitis, and cholangitis, are major public health problems. With an estimated 1.8 million ambulatory care visits each year, gallstone disease is a leading cause for hospital admissions related to gastrointestinal disease. (5)  A 2006 study reported that more than 700,000 cholecystectomies were performed in the United States at a cost of $6.5 billion dollars annually. (6)  Cholecystectomy is now the most common elective abdominal surgery performed in the United States. (7) (8) (9)

These numbers are likely an underestimate because laparoscopic cholecystectomy is often performed as a day procedure and thus not captured by hospital statistics that require overnight admission. Also not captured in the statistics is the pain of biliary colic that many patients experience.

Several studies, comparing those with gallstones versus those without, have shown that cholesterol gallstone formation is multifactorial. Some risk factors, such as ethnicity, genetics, advancing age, and female gender (including pregnancy) cannot be modified, whereas diet, BMI, Type 2 diabetes, and Crohn’s Disease (plus excess alcohol consumption and cigarette smoking) can be modified. (4)

With regards to diet, studies have reported that the risk of gallstones was positively associated with intake of meat, excess calories, fat and saturated fat, but negatively associated with intake of vegetables and fiber. (10) Nutritional exposure to the western diet, i.e. increased intake of fat, refined carbohydrates and a decrease in fiber content, is a major risk factor for the development of gallstones. (10)

In Japan, postwar westernization has provided an example for the interplay between environment and disease. Since the late 1940’s, the prevalence of gallstones in Tokyo has more than doubled. Moreover, there has been a change from pigment to cholesterol gallstones and the sex ratio has changed in favor of females. (11) This increase in gallstone incidence was associated with an increased fat intake and a decreased fiber content of the diet, and consequently was attributed to the westernization of the Japanese diet. (12)

While most studies show a decreased risk of gall stones among vegetarians, one did not although this should be regarded with caution, since it runs counter to the greater weight of evidence. (15)

The lower risk that vegetarians seem to experience begs the question of which dietary factors are operational. A study of vegetarians examining this question, found that although the prevalence of gallstone disease was less than half that of non-vegetarians, there was no difference in the intake of macronutrients between the study and control groups. In this cross-sectional study, the prevalence of gallbladder disease (asymptomatic gallstones or history of cholecystectomy) was significantly lower in vegetarians than omnivores (12% versus 25%). (16)

Heme iron, which is present in red meat, fish, and poultry, is highly bioavailable.  In one large cohort study, a higher intake of heme iron was associated with a higher risk of gallstone disease, with a dose-response relation that was not accounted for by other potential risk factors. (17)

Fiber decreases the transit time thereby lowering the risk of gall bladder disease and cholecystectomy in women. (24) In another study, women with the highest insoluble fiber intake had a 17% lowered risk of gallbladder surgery. (25)  A study on the benefit of consuming nuts found that men consuming 5 or more ounces of tree nuts per week had a 30% lower risk of gallstone disease. (26)

The prevalence of gallstones in patients with Crohn disease ranges from 13% to 34% in different studies, accounting for a total of about 700 patients. (33)  However, the risk of Crohn’s disease has been found to be reduced by 70% in female and 80% in male young people following a nearly vegetarian diet. (34)

As a result of this, vegetarians appear to have a lower risk of cholesterol gallstones because of their higher intake of fruits, vegetables, nuts, fiber and plant protein and also their lower BMI, risk of type 2 diabetes and Crohn’s disease.

Four types of abnormalities have been considered to be responsible for cholesterol gallstone formation. The first and essential requirement is bile supersaturation in cholesterol.

There also must be sufficient time for nucleation to occur, for crystals to form and grow to microliths, and for microliths to aggregate to form gallstones, hence gallbladder stasis is a contributing factor to gallstone formation. During overnight fasting, the gallbladder does not empty so that hours of storage occur in all individuals. (12)

Intestinal hypomotility has been recently recognized as a fourth primary factor in cholesterol lithogenesis. Having a longer exposure to intestinal micro-organisms, primary bile salts are in greater proportion deconjugated and dehydroxylated to more hydrophobic secondary bile salts. An increased proportion of the secondary bile acid deoxycholate, a potent down-regulator of the rate-limiting enzyme for bile acid biosynthesis, enhances cholesterol hypersecretion into bile. (12)

Excessive cholesterol secretion could result from defective conversion of cholesterol to bile acids, due to a low or relatively low activity of cholesterol 7α hydroxylase, the rate limiting enzyme for bile acid biosynthesis and cholesterol elimination. (35) Ascorbic acid, found in many fruits and vegetables reduces lithogenic risk in adults in that it influences α hydroxylase activity in the bile. (10)

Epidemiological and clinical studies have found that gallstone prevalence is twice as high in women as in men at all ages in every population studied. In pregnancy in particular, the incidence of cholesterol gallstones is increased by strong risk factors including obesity, serum leptin and extreme hypercholesterolemia.

The incidence rates of biliary sludge (a precursor to gallstones) and gallstones are up to 30% and 12%, respectively, during pregnancy and postpartum, and gallbladder disease is the most common non obstetrical cause of maternal hospitalization in the first year postpartum. (38) (39).  Between 1% and 3% of pregnant women undergo cholecystectomy due to clinical symptoms or complications within the first year postpartum.

During the period of a normal, healthy pregnancy, the body undergoes substantial hormonal, immunological, and metabolic changes. (40) (41) (42) (43) (44)  Some of these alterations become risk factors contributing to the formation of cholesterol gallstones in pregnant women, including weight gain, insulin resistance, and an altered gut microbiota. (40) (45) (46) (47) (48) (49) (50) (51)  Insulin resistance is a risk factor for incident gallbladder sludge and stones during pregnancy, even after adjustment for body mass index. (52) (53) (54)

Increased estrogen levels during pregnancy induce significant metabolic changes in the hepatobiliary system, including the formation of cholesterol supersaturated bile and sluggish gallbladder motility, two factors enhancing cholelithogenesis. During pregnancy, bile becomes lithogenic because of a significant increase in estrogen levels, which lead to hepatic cholesterol hypersecretion and biliary lithogenicity. In addition, increased progesterone concentrations impair gallbladder motility function, with the resulting increase in fasting gallbladder volume and bile stasis. Such abnormalities greatly promote the formation of biliary sludge and gallstones. Because plasma concentrations of female sex hormones, especially estrogen, increase linearly with the duration of gestation, the risk of gallstone formation becomes higher in the third trimester of pregnancy.  (40)

Serum leptin is a strong predictor of incident gallbladder disease in pregnant women. (55) However, a plant based diet has been shown to lower leptin levels. (56)

Prevention of gallstone disease is especially important in pregnancy when cholecystectomy is more problematic and medication can carry risks. At present extreme hypercholesterolemia is not treated during pregnancy, partly due to the absence of established normal parameters for pregnancy, as well as clinicians’ uncertainty as to the significance of elevated levels for a limited time period. HMG CoA-reductase inhibitors (statins), which are the most commonly used drugs to treat high cholesterol outside of pregnancy, are contraindicated. (57)

With established pregnancy-specific reference values, extreme maternal hypercholesterolemia could be identified and monitored. Due to recognized adverse effects of very high cholesterol on the pregnancy and the fetus, intervention with a cholesterol-lowering diet may be necessary and prove beneficial. (57)

A plant-based diet has been shown to lower the risk of obesity, reduce leptin and eliminate cholesterol from the diet, thus reducing serum cholesterol during pregnancy without the risk that drug treatment may entail. (58) The American Academy of Nutrition and Dietetics position statement on plant-based diets confirms their safety during pregnancy and lactation and that they may confer additional health advantages. (59)

While the risk of cholelithiasis is lower in vegetarians, a study looked at the risk factors that remained among vegetarians themselves. Risk factors useful for predicting cholelithiasis in vegetarians are age and total bilirubin level in men, and age, BMI, and alcohol consumption in women. Just as interesting is some indication of those factors which weren’t risk factors in this study. Many previously identified risk factors for the general population do not seem to apply to vegetarians. The study revealed that diabetes mellitus, coronary artery disease, cerebral vascular accident, chronic renal failure, hepatitis C virus infection, and lipid abnormalities were not associated with cholelithiasis in male and female vegetarians. This finding may be explained by the protective effect of vegetarian diets, according to the authors. (36)

Counseling patients who are already vegetarian should focus on modifiable risk factors, such as BMI and alcohol consumption, to reduce their risk still further. Some research has focused on determining which dietary factors account for the lower risk vegetarians have of gallstone disease. One study found that men consuming 5 or more ounces of tree nuts per week had a significantly lower risk of gallstone disease. (26)  In another study, those consuming the most fruits and vegetables were 21% less likely than those with the lowest intake to require cholecystectomy. (23)

While a plant-based diet cannot treat gallstones that have already formed, considering the scale of gallstone disease, the possibility of preventing about half the cases is very significant. It is particularly valuable as a way of reducing the risk of gallstones during pregnancy, when pharmaceutical methods are not possible. The plant-based diet can also prevent and treat common comorbidities such as type 2 diabetes, obesity and coronary artery disease. It has no adverse reactions and has no contraindications.

Promoting the Campaign at Bastyr University

Word is getting out there about our new Prescribe Vegetarian Campaign. This week we focused on promoting the campaign... read more

In response to our letter to Bastyr university, we received the letter below back from Jane Guiltinan, Dean of... read more