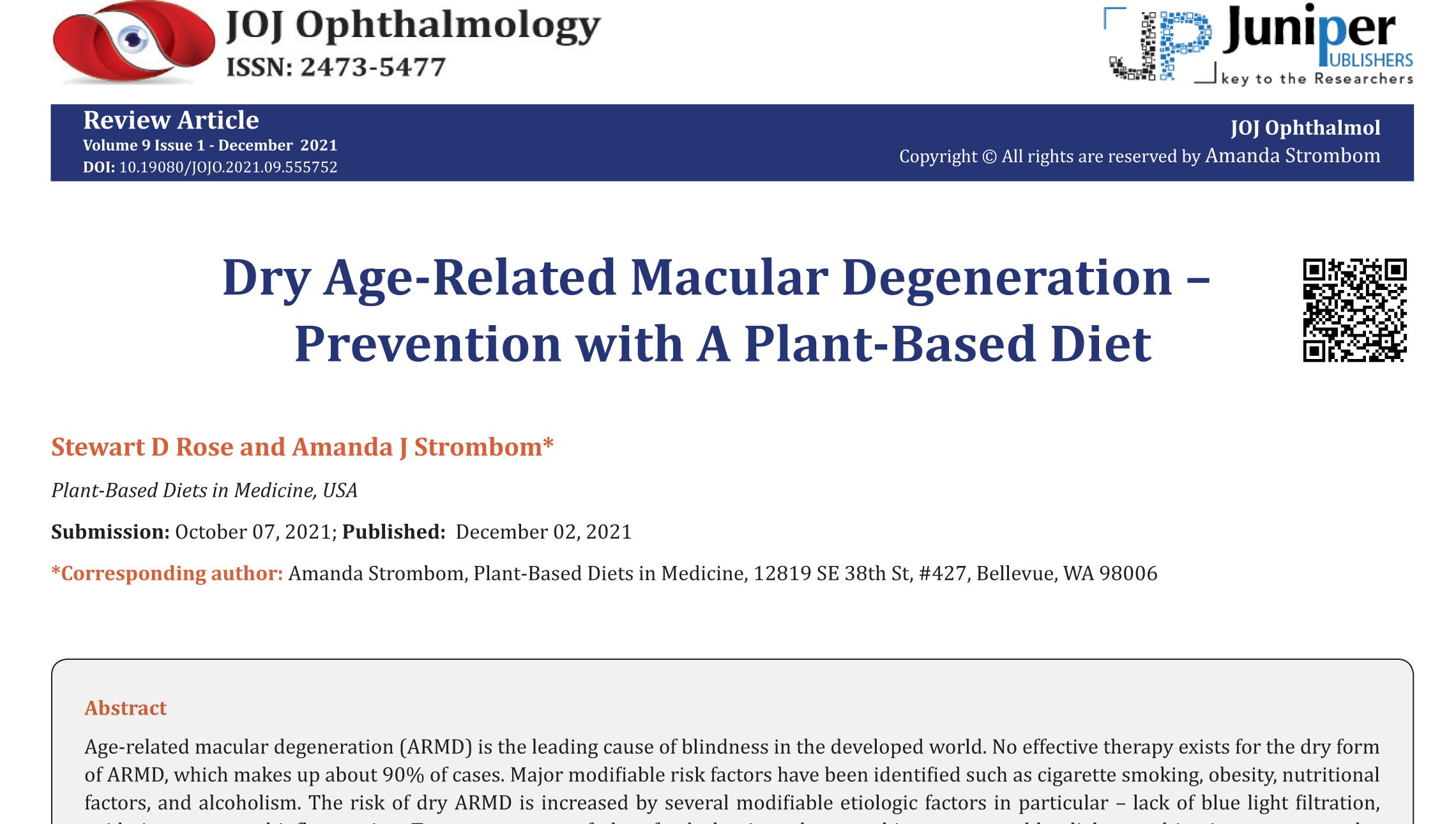 This article was published in JOJ Ophthalmology

Age-related macular degeneration (ARMD) is the leading cause of blindness in the developed world. No effective therapy exists for the dry form of ARMD, which makes up about 90% of cases. Major modifiable risk factors have been identified such as cigarette smoking, obesity, nutritional factors, and alcoholism.

The risk of dry ARMD is increased by several modifiable etiologic factors in particular – lack of blue light filtration, oxidative stress and inflammation. Two particular components of plant foods, lutein and zeaxanthin, screen out blue light, resulting in greater macular pigment optical density (MPOD), and act as antioxidants in the macular. A plant-based diet also reduces inflammation and lowers hsCRP. These factors combine to give vegetarians a lower risk of dry ARMD.

Epidemiological studies have shown that consuming meat raises the risk of dry ARMD while consuming plant foods lowers the risk. Studies have shown significant correlations between high lutein concentration in ocular tissues or in serum and reduced risk of ARMD. Vegetarians have been found to have a greater MPOD. A broad range of antioxidants from plant foods, in particular sulforaphane, can reduce oxidative damage, and may decrease the risk of dry ARMD.  Elevated levels of hsCRP, a marker of inflammation, predict greater future risk of ARMD. On a vegan diet hsCRP was reduced 32%, even more than on the American Heart Association diet.

Age-related macular degeneration (ARMD) is the leading cause of blindness in the developed world. (1) (2) It is becoming similarly important in the developing world in association with increasing longevity and Westernization of diet and lifestyle. (3)

ARMD may be classified as dry or wet. While geographic atrophy may occur in both the wet and dry forms of ARMD, it is better characterized in the dry form. (4) It is characterized by sharply demarcated areas of hypopigmentation in which choroidal blood vessels are more visible than in surrounding areas. (5) (6) Choroidal neovascularization (CNV) is more commonly seen in the wet form of ARMD. The dry form of ARMD is also known as non-exudative, non-neovascular, or atrophic ARMD. This is the more common form of ARMD, seen in about 90% of cases. (7) At present, no effective therapy exists for dry ARMD. (8)

Dry ARMD is a multifactorial disease, having both genetic, age and modifiable risk factors (9). The strongest risk factor is age: late ARMD can be found primarily in those aged 70 years and older. (10) (11) The risk of ARMD is greater in persons with a family history of the disease than in those without. (12) Observational studies have identified major modifiable risk factors such as cigarette smoking, obesity, nutritional factors, and alcoholism. (9)

The risk of dry ARMD is increased by three modifiable etiologic factors in particular – lack of blue light filtration, oxidative stress and inflammation. Two particular components of plant foods, lutein and zeaxanthin, screen out blue light and act as antioxidants in the macular. A plant-based diet also reduces inflammation.  Therefore we would expect a plant-based diet to contribute to a lower incidence of dry ARMD.

Epidemiological studies have demonstrated that consuming meat increases the risk of dry ARMD while consuming plant foods decreases the risk. However, it should be noted that most epidemiological studies on ARMD do not distinguish between wet and dry ARMD. (13) Since the vast majority of cases are the dry form of the disease, the results of research can be said to be broadly applicable.

One study showed that a high consumption of red meat (fresh or processed) increased the risk of developing ARMD. That risk was over two times greater with processed meat, such as salami or sausage. (14)

The Mediterranean diet pattern is characterized by high consumption of plant-based foods and fish and low consumption of meat and dairy products. In one study, adherence to the diet was associated with a 41% reduced risk of incident advanced ARMD. These findings support the role of a diet rich in healthful nutrient-rich foods such as fruits, vegetables, legumes, and fish in the prevention of ARMD. (15)

People who follow a vegetarian diet have a greater macular pigment optical density (MPOD), affording them greater protection from blue light and greater levels of antioxidants, (16) (17) resulting in a lower risk of dry ARMD.  One study showed that their MPOD was about 18% higher in vegetarian subjects compared to non-vegetarian subjects. (18)

Lutein and zeaxanthin are structural isomers that belong to a class of molecules called carotenoids. Carotenoids, which are primarily plant-derived lipophilic pigments, are essential factors in human health and development. Specifically, they function in a wide range of biological processes, including reproduction, embryonic development, immunity and vision. In the eyes, they help provide coloration and absorption of light energy.

Carotenoids may be divided into two general classes: carotenes and xanthophylls. Carotenes are non-polar molecules, which contain only carbon and hydrogen atoms, whereas xanthophylls are polar carotenoids, containing at least one oxygen atom. (19) Lutein and zeaxanthin are xanthophylls biochemically distinct from other carotenoids due to the presence of hydroxyl groups located at each end of these molecules. This functionality allows xanthophylls to be oriented in lipid membranes exposed to aqueous environments in a special and possibly protective way. (20) The xanthophylls (lutein and zeaxanthin) account for 20–30% of total carotenoids in human serum and 80–90% of total carotenoids in the human retina, (21) the highest concentrations anywhere in the human body, suggesting an important functional role for these molecules in the retina. (22)

Lutein and zeaxanthin confer macular protection via antioxidant and light-screening properties (24). Meso-zeaxanthin is a relatively recently discovered structural isomer of zeaxanthin and appears to be a metabolite of lutein or zeaxanthin. It also has both light filtering and antioxidant properties. (25)

The levels of macular pigments, usually measured in terms of the macular pigment optical density (MPOD), can reflect retinal health status (36) (37) (38) (39) (40). An inverse association between macular pigment density and ARMD has long been recognized. (41) (42)  Studies have shown significant correlations between high lutein concentration in ocular tissues or in serum and reduced risk of ARMD. (43) (44) (45)

Oxidative damage may play an important role in the pathogenesis of dry ARMD. Oxidative stress, which refers to cellular damage caused by reactive oxygen species (ROS), has been implicated in many disease processes, especially age-related disorders. ROSs include free radicals, hydrogen peroxide, and singlet oxygen, and they are often the byproducts of oxygen metabolism. (46) Oxidative stress is a major risk factor for the pathological development of retinal diseases and vision impairment.

With age, the retinal pigment epithelium (RPE) and the space between the RPE and Bruch’s membrane gradually accumulate lipofuscin, a heterogeneous fluorescent mixture rich in lipid-protein complexes, which is also composed of by-products of vitamin A metabolism and lipid peroxidation. (47) (48) (49).

Lipofuscin is undegradable and also acts as a plausible photosensitizer, generating ROS. (50) The retina is particularly susceptible to oxidative stress because of its high oxygen consumption, its exposure to light (photo-oxidation),  and its exposure to high levels of ROS acting on PUFA content, including docosahexaenoic acid (DHA). (51) (52)

Unfortunately, as we age, oxidative damage increases and antioxidant capacity decreases, as does the efficiency of reparative systems (54). It appears that these age-related oxidative changes are characteristic indicators of early dry ARMD, which, in combination with hereditary susceptibility and other retinal modifiers, can progress to the pathology and visual morbidity associated with advanced dry ARMD. A broad range of antioxidants, known to have chemical properties that can reduce oxidative damage, have been proposed to decrease the risk of dry ARMD, (55) (56) (36) in particular sulforaphane.

Sulforaphane (SFN) is an isothiocyanate molecule present in cruciferous vegetables, broccoli being the most relevant example of a natural SFN source. (57) Two studies demonstrated the antioxidant potential of SFN on human RPE cells exposed to oxidant agents, including different chemical oxidative stressors and light exposition. (58) (59)

The mechanism by which sulforaphane accomplishes this has been determined. (60) SFN induces the expression of the phase 2 genes, through activation of the Nrf2. These genes encode for different antioxidant enzymes, including glutathione transferases or NAD(P)H dehydrogenase quinone. (60)

The mechanism of action of SFN is based on the dissociation of the transcription factor Nrf2 of Keap1, a cytosolic repressor, promoting its translocation to the nucleus and inducing an antioxidant response. The binding of Nrf2 to the DNA promoter region antioxidant-responsive element (ARE), triggers the nuclear antioxidant response, through an increased expression and activity of reductive systems (61) (62).

A plant-based diet protects against chronic oxidative-stress-related diseases. Dietary plants contain variable chemical families and amounts of antioxidants. Plant antioxidants may contribute to the beneficial health effects of dietary plant foods. (63) On average plant foods provide 11.57 mmol/100gm antioxidant content, while animal foods provide only on average 0.18 mmol/100gm. (63)  It is therefore to be expected that a plant-based diet could decrease the risk and progression of dry ARMD through reducing oxidative stress.

Inflammation also plays a significant role in the incidence and progression of dry ARMD. (64) (65) (66) Drusen, subretinal deposits indicative of the onset of ARMD, have been shown to contain fibrinogen, vitronectin, complement components, and high-sensitivity C-reactive protein (hsCRP), proteins associated with generalized inflammation. (67) (68) (69) Inflammatory cell debris has also been isolated from the outer surface of the Bruch’s membrane in eyes with dry ARMD. (70)

Pooled findings from 5 prospective cohorts show that elevated levels of hsCRP predict greater future risk of ARMD. (71) Lower levels of hsCRP were found in those following a vegetarian diet for more than 2 years. (72) (73) An interventional study found that after 8 weeks on a vegan diet hsCRP was reduced 32%, even more than on the American Heart Association diet. (74)

To help prevent dry ARMD, patients should be encouraged to eat plenty of foods containing lutein and zeaxanthin along with other plant foods containing antioxidants, as a part of a healthy plant-based diet. Lutein can be found in several vegetables such as kale, spinach, romaine lettuce, broccoli and some nuts such as pistachio nuts. Zeaxanthin can be found in foods such as corn, orange peppers, mango and orange juice. (75) (76) Supplements are also available and some studies indicate that they may slow the progression of ARMD (77)

Bilberry and lingonberry extracts may also have a protective effect against blue light photooxidation through their antioxidant properties. (78) (79) (80) (81)

Despite initial enthusiasm, a meta study found that fish oil supplements (omega 3 LCPUFA) supplementation in people with ARMD for periods up to five years does not reduce the risk of progression to advanced ARMD or the development of moderate to severe visual loss. (82)

A plant-based diet can be very efficacious in the prevention and treatment of comorbidities such as hypercholesterolemia and type 2 diabetes. For instance, the plant-based diet is as efficacious as Lovastatin in treating hypercholesterolemia, and is more efficacious than Metformin in treating type 2 diabetes. (83, 84) It also reduces the risk of a number of other pathologies such as coronary artery disease, (83) stroke, (85), osteoarthritis, (86) prostate and colon cancer, (87, 88) diverticular disease, (89) ulcerative colitis, (90) Crohn’s disease, (91) Grave’s disease, Hashimoto’s thyroiditis (92) and rheumatoid arthritis (93) just to name a few.

There is currently no treatment for non-neovascular ARMD. Therefore, prevention, always of prime importance, becomes even more important. As longevity has increased in the developed world, the prevention of chronic diseases is needed even more than before.

It’s notable that plant foods supply both zeaxanthin and lutein along with fiber but with little saturated fats. The plant-based diet has no contraindications or adverse effects. It can help treat several common comorbidities.

One weakness of this research review is that much of the research fails to report the type of ARMD studied. Since 90% of the cases of ARMD are dry ARMD, this is unlikely to change the conclusion. 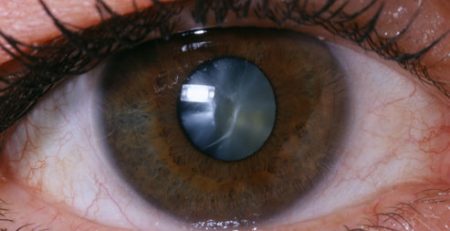 Cataract Risk is affected by Diet

According to the World Health Organization, cataract is the leading cause of blindness in the world. While not a... read more