There has been increasing interest in the role played by the gastrointestinal flora in the etiology of a variety disease processes. It had been known that long term changes in diet influenced the human gut microbiome. Recent research has focused on how the flora of those following a vegetarian diet differ from those on other diets, and what advantages that may convey.

One area of research has looked at how rapidly the gut flora can change. It seems that changes commence even in the short term. One new study showed that dietary changes affected the make up of the intestinal flora in subjects who switched between vegetarian and meat eating diets. Increases in the abundance and activity of Bilophila wadsworthia in the intestines of those on a meat-centered diet, occurred in only a couple of months. The authors note that this supports a link between dietary fat, bile acids, and the outgrowth of microorganisms capable of triggering inflammatory bowel disease.[i]

In another study, strict vegetarian or vegan diets were shown to result in a more anti-inflammatory profile of bacteria. Researchers attributed this to the effect of greater fiber intake characteristic of vegan diets and its effect on the flora.[ii]

Research is ongoing on the relative contribution of gastrointestinal flora to the superior health that vegans experience in general, and concludes that “The vegan gut profile appears to be unique in several characteristics, including a reduced abundance of pathobionts and a greater abundance of protective species. Reduced levels of inflammation may be the key feature linking the vegan gut microbiota with protective health effects.”[iii]

Another area of research has focused on how the flora of those on a plant-based diet influence the absorption of minerals. There has long been a theoretical concern about the larger intake of phytates inhibiting mineral absorption of some minerals, such as iron and zinc in those following a vegetarian diet. However there was little evidence of deficiency commonly occurring in practice. Part of the answer lies in the microbiota of the vegetarian. It turns out that their flora act to degrade phytate, thus allowing for good absorption of minerals. One recent study concludes that, “it was the vegetarians’ microbiota that particularly degraded up to 100% phytate to myo-inositol phosphate products.” A diet rich in phytate increases the potential of intestinal microbiota to degrade phytate. The co-operation of aerobic and anaerobic bacteria is essential for the complete phytate degradation.[iv]

We look forward to more research on this new area of interest. More research is needed on whether the flora of vegetarians would confer greater protection from gastrointestinal pathogens, and to the extent to which it could help prevent inflammatory bowel disease and Crohn’s disease. There’s some evidence in this direction already for diverticulitis but more research is needed.[v] 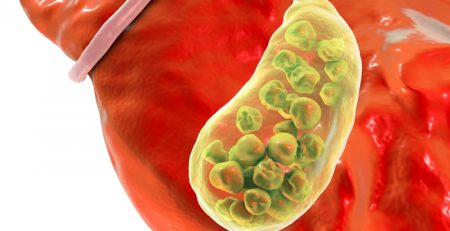 The prevalence of cholelithiasis is about 10 percent to 15 percent of the population of the U.S., or well... read more