The prevalence of cholelithiasis is about 10 percent to 15 percent of the population of the U.S., or well over 25 million people. Nearly 1 million new cases of gallstone disease are diagnosed every year and approximately one quarter of these require treatment. The burden of cholelithiasis and its complications, such as cholecystitis, pancreatitis, and cholangitis, are major public health problems. A 2006 study reported that more than 700,000 cholecystectomies were performed in the United States at a cost of $6.5 billion dollars annually.[i]

Most patients are asymptomatic, but approximately 20% become symptomatic after 10 years of follow up.[ii] A study of both symptomatic and asymptomatic sonographically-confirmed cholelithiasis cases, found that the prevalence of gallstones was 1.9 time higher in non-vegetarians than in vegetarians.[iii]

This begs the question of which dietary factors are operational in the lower risk of cholelithiasis that vegetarians seem to experience. A study examining this question found that, although the prevalence of gallstone disease was less than half that of non-vegetarians, there was no difference in the intake of macronutrients between the study and control groups. In this cross-sectional study, the prevalence of gallbladder disease (asymptomatic gallstones or history of cholecystectomy) was significantly lower in vegetarians than omnivores (12% versus 25% p<0.01).[iv]

While the risk of cholelithiasis is lower in vegetarians, another study looked at the risk factors that remained amongst vegetarians themselves. Risk factors useful for predicting cholelithiasis in vegetarians are age and total bilirubin level in men, and age, BMI, and alcohol consumption in women. Many previously identified risk factors for the general population do not seem to apply to vegetarians. Just as interesting is some indication of what weren’t risk factors in this study. The study revealed that Diabetes Miletus, coronary artery disease, cerebral vascular accident, chronic renal failure, hepatitis C virus infection, and lipid abnormalities were not associated with cholelithiasis in male and female vegetarians. This finding may be explained by the protective effect of vegetarian diets according to the authors. [vii] Counseling patients already vegetarian should focus on modifiable risk factors, such as BMI and alcohol consumption, to reduce their risk still further.

Other research has focused on determining which dietary factors lower the risk of cholelithiasis among the general public. One study found that men consuming 5 or more ounces of tree nuts per week had a significantly lower risk of gallstone disease (relative risk = 0.70, 95% confidence interval: 0.60, 0.86; p(trend) < 0.001).[viii] In another study, those consuming the most fruits and vegetables were 21% less likely than those with the lowest intake to require cholecystectomy.[ix] 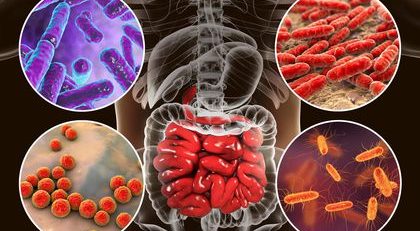 There has been increasing interest in the role played by the gastrointestinal flora in the etiology of a variety... read more